6th of May will be my last “official” day at Teamwork. Now I’m on my 2nd Annual Leave week, so effectively I’m out of the company since last Friday April 23th. Leaving a job can or can’t be a big deal. It depends on how invested you’re in it, how much you need the money, your personal / finances situation, etc. For me, as excited and happy I am about my next role, this is a sad event.

I’m not leaving a job. I’m leaving a team, a company of really nice people, with values so close to mine I didn’t have to do anything to understand them or adapt to them. And we live by our values, really. This is not some corporate bullshit to plaster in a wall, like those pictures of people rowing in suits. The most important value for me was that we look for good people, that are also good professionals. Notice the former is the most important of both traits. And this is enforced. If you’re a Dick, you’re fired. I’ve seen this. No dicks allowed around. Our 7th value is “Don’t be a dick”.

I joined Teamwork back in January 2018. Was the first full-remote member in the Mobile Team. I had been working remotely for years before, as a freelancer and at Mobile Jazz, so I knew the drill. But at Teamwork this was a novelty. My boss, Mike, took the risk and I think it worked out, most of the time. They had to put up with my jokes, grandpa tales of 80s micro computers and lots of fails and bugs, but in the end I wasn’t fired, so most probably nobody hated me to that point ;-).

Those first two weeks I spent in Cork, going to the Teamwork Campus 1 office each day were among the best I’ve ever had working in my whole career. Being used to poverty and starvation as a freelancer working in Spain I really enjoyed the luxury of sitting in aeron chairs, having dual 27” arm-mounted Monitors in nice desks, sliding back using a real slide to have coffee at the canteen, getting work equipment for free. 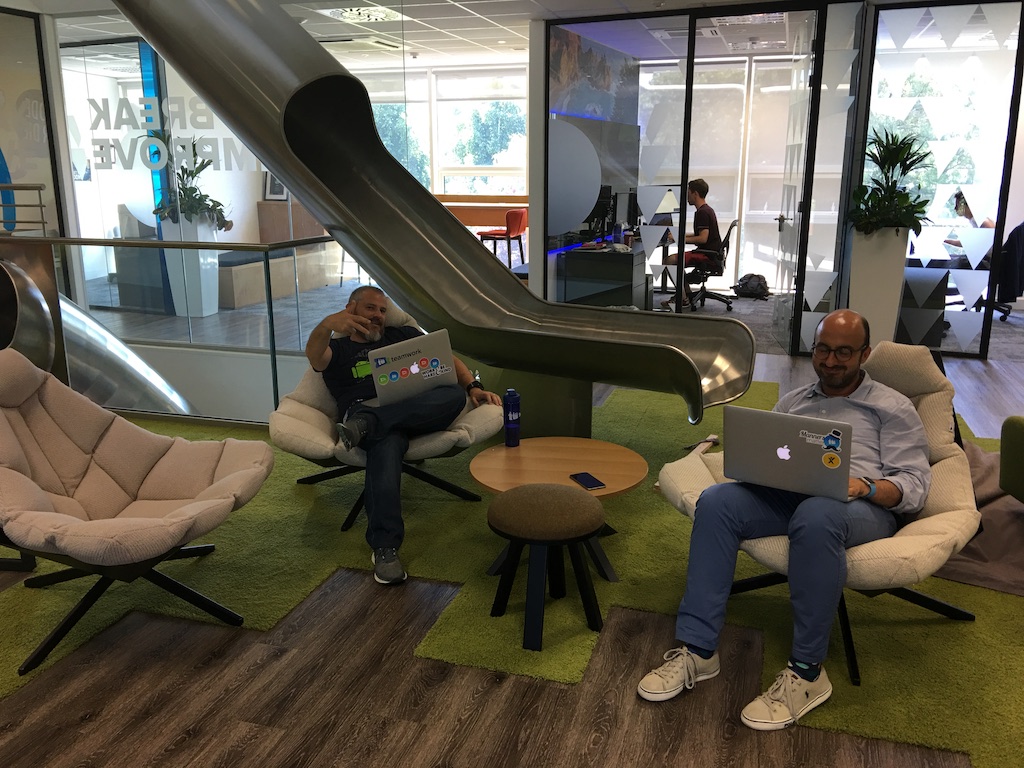 Yes, being a freelancer in Spain sucked at the time, or most probably I sucked at being a freelancer. I was underselling my working hours, always waiting for the next payment and so on. Working at Teamwork was life-changing for me and I’ve never looked back at freelancing.

I’ve learned a lot during these three years. Mostly, how to work with a team effectively. I started maintaining the old Appcelerator Titanium mobile apps. So I had to learn everything about the Titanium Framework, gulp, Node.js, CoffeScript, the existing code base, the products… Then I moved into Chat, a 100% native iOS app written entirely in Swift, using sockets and Core Data, and really enjoyed the change. Giving love to not so shiny code is something I enjoy doing. My final year has been all Projects Native (here for iOS), a really big and complex app, with tons of good ideas implemented, written using RxSwift at its core. Should have learned more from my team, but in the end I did understand (finally) some RxSwift and was able to contribute something.

Exciting times ahead for me, but I’ll be always grateful to the best job I’ve ever had the privilege of working at. I’ve left Teamwork but I hope the Teamwork spirit will never leave me.